How Color Print Tricks the Eye 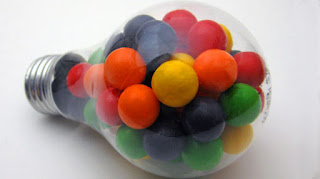 Consider for a moment the marvel that is color printing.

It uses a scientific trick of lightwaves - Metamerism - plus engineering marvels that electrostatically charge a piece of media in very specific places, then release precisely placed, incredibly small grains of colored toner, and a developer fluid that reacts with the fuser's heat to bond those particles, all to trick your eye into thinking that a reflective surface is an emitting surface.

Hundreds of times a minute.

Or spray micro-drops of ink from two directions at once as the media rolls by.

And the controlled combination of colored toners or inks trick our eyes into interpreting a reflective surface as if it were an emitting surface. This is a trick worthy of magic, but really, it's science.

Here is a basic explanation of the color spaces involved with printing.

Simply put, the Cyan, Magenta and Yellow printing inks cancel out the Red, Green & Blue wavelengths of light coming to our eyes from the media's surface, metamerizing the wavelengths, tricking our biological processor into thinking it is the RGB of our human color vision.

Why red, green and blue? You may remember from science lessons in school - visible light is a spectrum of light, described as frequencies, ranging from reds through the colors of the rainbow into blues and purples.

From a scientific point of view, light can be a mixture of any of those monochromes, light of a single frequency.

From a design point of view, since we can’t perceive the difference, it simply does not matter, and so we can abstract any color we can see as a mixture of red, green and blue. 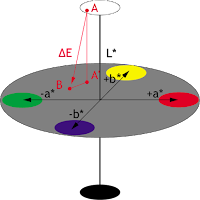 The science of digital color, however, describes color using the L*a*b* color model, among others, which is a bit less intuitive but more closely approximates how the human visual system works.

It uses the Lightness values of an image (the grayscale version) as an axis to rotate opposing poles of chromacity described as a* (red vs green) and b* (yellow vs blue) to describe the gamut of human color vision.

“But wait," I hear you cry, “You just told us human eyes sense red, green and blue!” That is true, it’s called the Trichromatic model of vision, and while it describes how the individual cones in the eye work, it doesn’t accurately describe the visual system as a whole.

Separating the human perception of lightness from color leaves the a & b dimensions as measures of chromaticity, brightness independent of color. This is important, as some colors appear brighter or darker, despite being at the same intensity.

So let's look at the rods and cones mentioned above.

The ventral stream (purple) is important in color recognition. The dorsal stream (green) is also shown. They originate from a common source in the visual cortex.

The retina is the innermost of three tissue layers that make up the eye. The outermost layer, called the sclera, is what gives most of the eyeball its white color. The cornea is also a part of the outer layer. 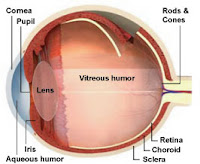 The middle layer between the retina and sclera is called the choroid. The choroid contains blood vessels that supply the retina with nutrients and oxygen and remove its waste products.

Embedded in the retina are millions of light sensitive cells, which come in two main varieties: rods and cones.

Rods are used for monochrome vision in poor light, while cones are used for color and for the detection of fine detail. Cones are packed into a part of the retina directly behind the retina called the fovea, which is responsible for sharp central vision.

When light strikes either the rods or the cones of the retina, it's converted into an electric signal that is relayed to the brain via the optic nerve. The brain then translates the electrical signals into the images a person sees.

----------
Do you have a color management question, horror story or event to share?
Email me at reilley4color@gmail.com

Got a comment, or correction? Please let us know!